Covid-19 in Turkey: Where did it go wrong?

Covid-19 in Turkey: Where did it go wrong? Cases and deaths are hitting record highs as criticism of the government’s pandemic response grows ever louder
Yusuf Selman InancMon, 04/19/2021 - 12:54 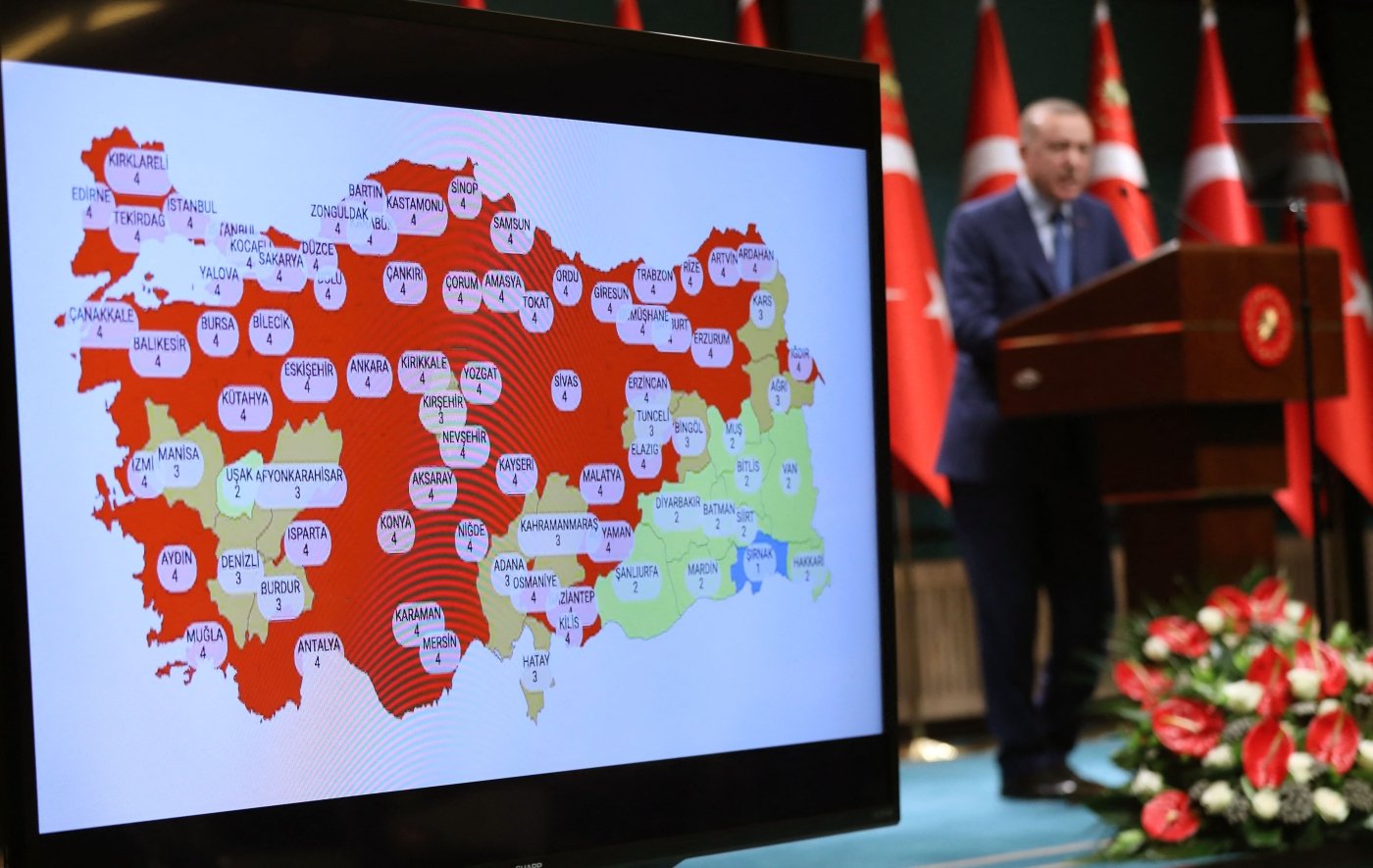 Turkish President Recep Tayyip Erdogan gives a press conference next to a map of Turkey with Covid-19 figures, at the presidential complex, Ankara, on 29 March 2021 (Adem Altan/AFP)
Despite swift early action to combat Covid-19, Turkey’s pandemic response has been hampered by inconsistent policies and poor compliance with rules. As the months have dragged on, questions have also been raised about the government’s handling of the pandemic.

Long- and short-term economic problems - including the depreciation of the Turkish Lira against the US dollar, rising unemployment, high inflation and unstable economic leadership - have further hamstrung any potential bounceback.

Turkey has seen an unprecedented surge in Covid-19 cases in the last few weeks. The number of daily cases dropped close to 6,000 at one point in mid-February, but the country reported 61,400 new cases on Thursday and 297 deaths - the highest number in a single day since the virus was first detected over a year ago. The number of deaths was broken again on Sunday, with 318 in a single day. 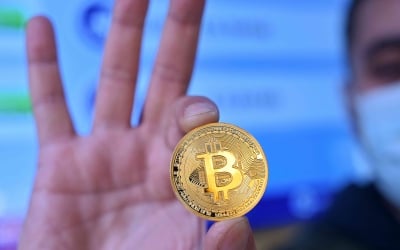 Turkey: Cryptocurrency ban triggers concerns over more regulations
Read More »
The increases come despite new, more restrictive measures to combat the virus. So what is Turkey getting wrong?

Merve Tasyuz Polat, a primary care doctor in Istanbul, places much of the blame on the general public.

“People do not follow the rules and abide by the restrictions,” she told Middle East Eye. “The primary instrument in the combat against the pandemic is not the government-imposed restrictions or curfews, but personal measures, such as observing social distancing, washing hands, etc.”

“People do not care,” she added. “I observe that people are weary. But a considerable majority of them have been indifferent to the danger since the beginning. It is impossible to handle the pandemic while people are so indifferent.”

Rules allowing people to go to market, for example, are often exploited for other purposes.

Polat recognises the influence of the flagging economy on the health situation, but feels Turkey’s “disorganisation” is more to blame.

“On the one hand, people remain reluctant to fulfil the requirements. On the other hand, doctors fail to apply the instructions sent by the ministry. The polarised nature of politics and society is manifested in health facilities as well. The rift between different doctor groups with varying political views harms the struggle against the pandemic.”


'We are trying to slow the pandemic so that the health capacity will not be overloaded… Otherwise, it will become a disaster'

A source close to the health ministry told MEE that the ministry has been “purchasing any vaccine that is available, regardless of its origin”.

Turkish Health Minister Fahrettin Koca announced on Thursday that Turkey was in contact with vaccine producers in Germany, China and Russia and ramping up “vaccine diplomacy”.

Kubra Bagc? Derinpinar, an assistant at Uludag University's medical faculty, agrees with Polat that vaccination, plus proper restrictions, is the way forward.

“A stricter curfew is indeed necessary. During the curfew, the vaccination must be accelerated. We have observed that vaccination has considerably decreased the number of deaths among people aged 65 and over [a priority group for vaccinations].”

She questions whether it was best to vaccinate the elderly first, however, as they are still required to stay at home for all but four hours per day.

Questions hang over other government decisions, too.

“The timing of the restrictions was wrong,” a high-level state official, who asked to remain anonymous due to the political sensitivity of the issue, told MEE.

Turkey was quick to respond to the initial threat of Covid-19. The government formed its Science Council in early January 2020, a few days after the World Health Organisation declared the pandemic.

And following the detection of the first case, several strict measures were passed. Shopping centres, barbers, restaurants, schools and anywhere else human-to-human contact might accelerate the spread of the coronavirus were closed.

But “Turkey fell behind the pandemic, started taking measures by looking at the consequences of former restrictions”, said the official, who has been closely following Ankara’s pandemic policies.

Turkey instead should have “attempted to be quicker than the pandemic”, he added, as it did early on.


He divides Turkey’s pandemic response into healthcare, which he sees as a success, and politics, which has been less convincing.

“When I contracted Covid-19, for example, during the second peak [November-February], I received great treatment. I had the test easily, the drugs were delivered immediately and health officials checked my situation every day,” he said.

But, he added, for the second part of the fight - preventing the virus from spreading - political and economic concerns trumped the implementation of required measures.

Following the recent increase in cases, Turkish President Recep Tayyip Erdogan introduced an array of further restrictions, including curfews and closures, which are scheduled to last until mid-May. 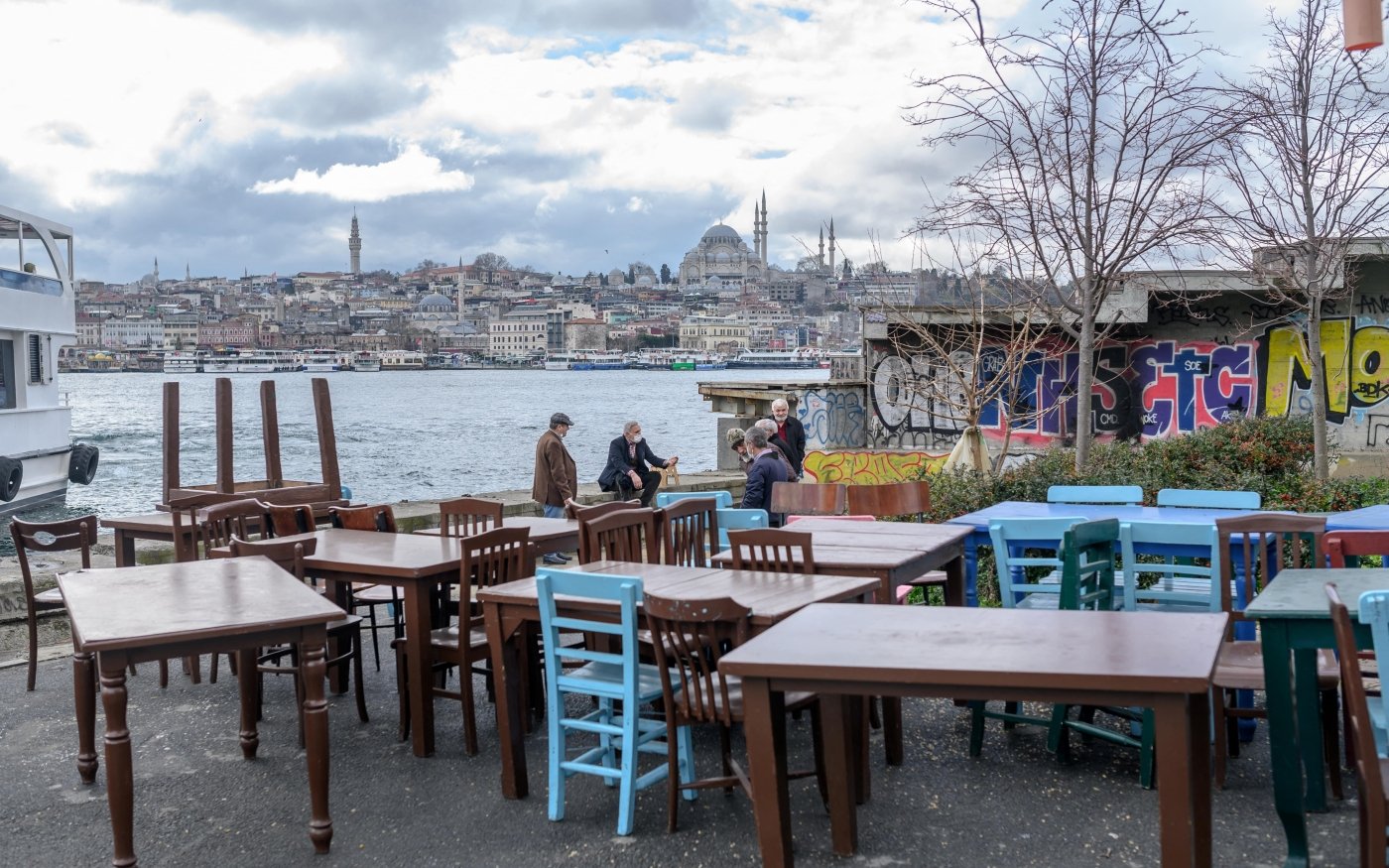 People talk by a restaurant at Karakoy, Istanbul, on 2 March 2021, before restrictions were again placed on dining out (Bulent Kilic/AFP)
But for ?brahim Nuri Derinp?nar, a Bursa-based lawyer, who has closely been following the impacts of the pandemic on the judicial processes, “the government has lost its credibility”.

“There is a huge amount of disinformation, lack of confidence in the Science Council and visible inconsistencies in the government’s policies,” he said, citing the fact that Turks have to wear a mask in the street, even if alone, but are allowed to go on holiday, while tourists can easily come to Turkey.

Other such decisions include the cancelling of social-distancing obligations on buses and trains, and the inconsistency of political parties - ruling and opposition - being allowed to organise mass meetings while people are still expected to conform to restrictions.


"We are holding a congress in the period of the pandemic and the hall is jam-packed,” Erdogan said at a large rally in his hometown, Rize, in February,*just after Turkey’s new daily cases had hit a low point.


'It is true that there is despair. The government tries to find a balance between the two. Currently, the pandemic is outweighing the economy'

Permission for these gatherings is given by public healthcare directorates in the relevant districts.

“Courts are cancelling the penalties that police give people who violate government-imposed restrictions… Due to this lack of credibility, along with inconsistencies,” he said, “people are reluctant to abide by the instructions.”

For Mehmet Erken, a government employee at Istanbul University,*the impact of the government message is further diluted by*the fact that “the government has not fully understood the social aspect of the pandemic, despite forming a Council of Social Sciences to this end.

As per national guidelines, lawmakers, security officials, bakers, market staff, imams, couriers and many employees from other sectors are exempted from restrictions.

Because of this, Erken added, “the decision-makers are not in a position to understand the impacts and consequences of the curfews”.

“We are facing the economy-pandemic dilemma. On the one hand, our work capacity has decreased. On the other hand, the costs have dramatically increased,” he said.

“It is true that there is despair. The government tries to find a balance between the two. Currently, the pandemic is outweighing the economy. Maybe the curfew works but the government’s policy for handling the economy is insufficient.”

Healthcare workers on the frontline are reticent, however, to prioritise the economy if that means loosening restrictions.

“We are trying to slow the pandemic so that the health capacity will not be overloaded,” said Polat, the primary care doctor. “Otherwise, it will become a disaster.”


Covid-19
Istanbul, Turkey
Where did Turkey's response to the Covid-19 crisis go wrong?

Covid-19 in Turkey: Where did it go wrong?