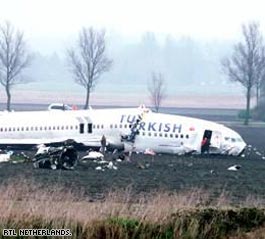 A Turkish airliner with 135 people on board crashes near Amsterdam's Schiphol airport. Pictures show the plane broken into three pieces. "Some passengers are dead, some are injured and some are alive," an airport spokesman tells CNN. full story

اقتباس:
(CNN) -- A Turkish airliner crashed at Amsterdam's main airport about 10:40 a.m. Wednesday local time, Dutch airport officials said.
"Some passengers are dead, some are injured and some are alive" in the crash, a spokesman from Schipol airport's press office said over the telephone before hanging up.
Turkish media said the plane was carrying about 135 people.
Don't MissThe Boeing 737-800, which originated from Istanbul, Turkey, was trying to land at Amsterdam Airport Schiphol when it went down.
Airport officials had originally said that the plane was an Airbus 380.
Pictures from the crash site showed the plane split in three parts.
Kieran Daly, of Air Transport Intelligence, said the pictures indicated there had not been a widespread fire.
He said the impact had been severe but it could have been survivable because of the lack of fire.
Daly said their had been vast improvements in the materials used to build airplanes, meaning they did not burn as easily
اقتباس:

A Turkish Airlines plane has crashed on landing at Amsterdam's Schiphol international airport.
The plane, with 135 passengers on board, crashed near the A9 motorway and suffered significant damage.
It was Flight 1951 and was a 737-800 aircraft, the airport said.
There were no confirmed reports of casualties. Reuters news agency, quoting Turkish media, said at least 50 people survived unhurt. The BBC's Geraldine Cochlane in the Hague says Dutch television has been showing pictures of helicopters at the scene, with about 20 ambulances and fire engines. Schiphol is the fifth-largest passenger airport in Europe.

A Turkish Airlines plane has crashed on landing at Amsterdam's Schiphol international airport, injuring at least 20 people.
The plane, with 135 passengers on board, crashed short of the runway near the A9 motorway and suffered significant damage.
It was Flight 1951 from Istanbul and was a Boeing 737-800 aircraft.
Witnesses have spoken of seeing at least 20 passengers walking from the wreckage, with luggage scattered about.
There were 127 passengers, including a baby, and seven crew on board.
Earlier reports said there was one dead, but Turkish Transport Minister Binali Yildirim later clarified that no-one had died.

Dutch television reported that rescuers had been hampered in getting to the scene because the field was recently ploughed.
The BBC's Geraldine Coughlan in the Hague says television has been showing pictures of helicopters at the scene, with about 20 ambulances and fire engines.
All flights have been suspended.
The last crash involving a Turkish Airlines plane was in 2003 when 65 people died in an accident in Turkey. Schiphol airport has six runways and one major passenger terminal. In 2007, it handled 47 million passengers, ranking fifth in Europe 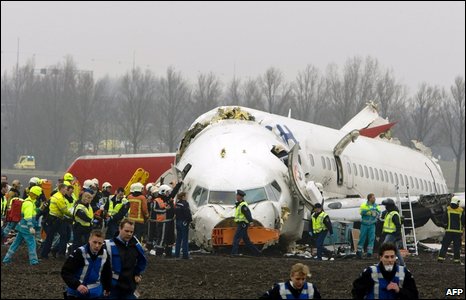 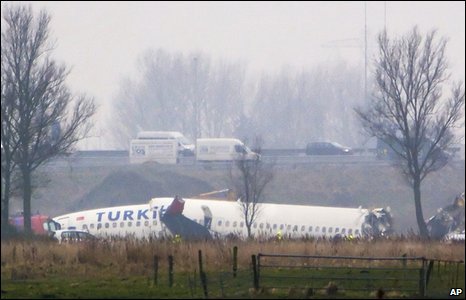 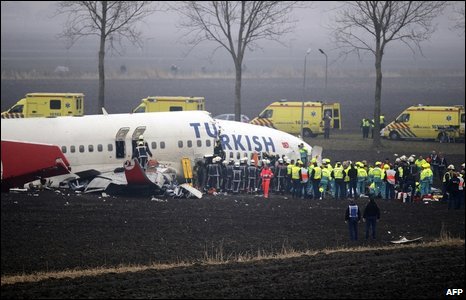 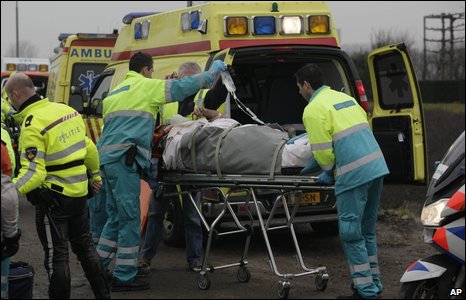 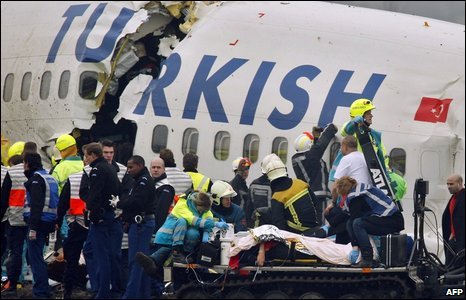 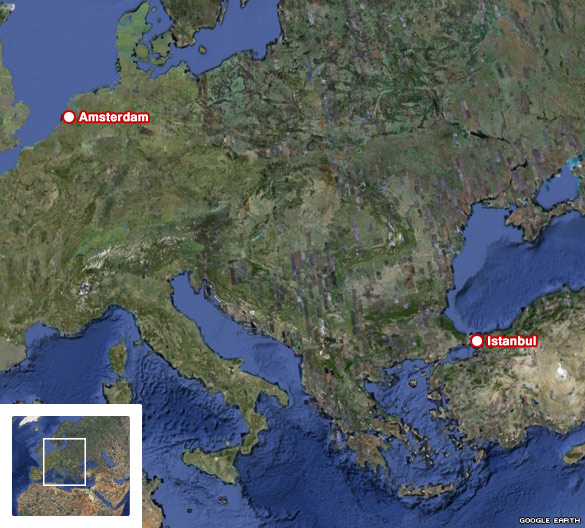